The wind in your hair! The sun beating down on your face! The thrill of victory and the agony of defeat! This time we were at the Frankford Riverfest. We had walked past a stack of hay bales to the finish line.
The Frankford Riverfest Soap Box Derby was about to begin. You could see the excitement on the faces of the Moms and Dads as they waited for their sons or daughters to come charging down the hill! All the hours of hard work building and designing the definitive Soap Box were coming down to this! This is a scene that is typical of most of the Soap Box Derbies we have visited. The determination in the eyes of the racers, no matter how young or old is always there! I can remember one race that we visited where two racers were coming down the hill side by side. Suddenly the wheels of the racer on the left started to wobble! Others in the crowd saw it too! You could see the determination of the young girl as she fought to regain control! Try as she might, the Soap Box finally took over and veered off course and ran into the hay bales at the side of the road! There was panic in the eyes and voices of the on looking crowd. No one knew if the driver was okay. Two paramedic, who had been stationed part way down the hill, rushed to the accident site! After refusing the paramedics help, the girl stood up, shook the hay off her clothes, pulled the Soap Box back onto the road, climbed in and continued down the course to the finish line! The crowd cheered and applauded the girl’s efforts and where grateful that the racer had survived the crash!


Such is the world of Soap Box Derby racing where little heroes are made! 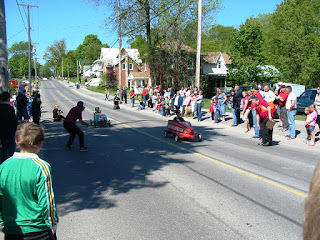 Posted by Gary and Judi McWilliams at 5:47 AM No comments:

Where to Go… What to Do…

As I have mentioned previously, Judi and I plan, each year to visit 50 or so Ontario communities and their festivals, events and attractions! To put that into perspective, we have 52 weeks to visit 50+ communities and events. That means we have to average 1 visit per week over the 52 weeks! So much for the math!
Here’s our dilemma, most festivals and events take place during the summer and fall months. That means there are a lot to choose from during those months and we have had a great number of requests from festival and event organizers to visit their events. There are so many great and interesting festivals and events, it’s hard to decide which ones to visit! The problem is, we want to visit them all! But, of course, we can’t, so we have to make some choices. In doing this we have to take into consideration timing (month-day-times) and distance. Distance is important because, if we need to visit more than one event (community) per week, logistics can be a challenge.
Fortunately, Judi and I having been traveling and visiting Ontario communities and their events for over 10 years, so we now have METHOD to our MADNESS! Our planning process is now simple, especially since we started to present our “Oh Canada Eh! Game”. We just look for communities where we have not produced an “Oh Canada Eh! Game”. If they have an interesting attraction or event, so much the better! Judi’s and my ongoing philosophy is that our trips and visits must be enjoyable. Frankly, if we don’t enjoy where we go, how can we tell our website visitors… “Where to go and what to do”?
As the “OLDE NOMAD” says ~ BEEN THERE… DONE THAT!
Hope to see you down the road! 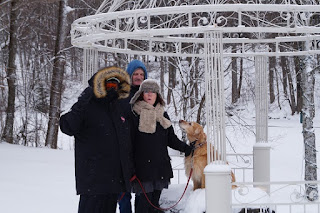 Posted by Gary and Judi McWilliams at 6:09 AM No comments:

Judi and I love to visit festivals. I think some of our most favourites involve fruit and fruit themes! I am always interested in seeing how festival organizers incorporate “fruit themes” into their festival plans. Some are more imaginative then others. Take for example the Bala Cranberry Festival held each fall. Everywhere you looked the fruit was present. There were cranberry booths dotted amongst most of the festival’s attractions and activities. Each booth offered a variety of different cranberry products. The biggest attraction, however, at the festival was the Johnson’s Cranberry Farm. To get to it you had to drive a little out of down, but then again, who wants a cranberry marsh in the middle of town! Once we were at the farm there was a lot to see and do. To find out more, log onto our Bala Cranberry Festival article (click here to see article - http://www.ontariofestivalsvisited.ca/fesivals/2007/fall/bala_cranberry.htm).  We were amazed at what their farm store offered! Here is just a small sampling of the products we saw: wines (there were too many different types to count!), juices and jams (many different combinations); chocolates (too yummy for words!), candles (a variety of scents) and the list goes on!
Unfortunately for me, I am not that fond of cranberries, but Judi is! Peaches on the other hand, present a much different story! I am a peach fanatic, especially peach pie! Last summer we visited the Winona Peach Festival (click to read article - http://www.ontariofestivalsvisited.ca/fesivals/2007/summer/winona_peach.htm). In the centre of the festival grounds is a large “Food Court”. Almost every booth offered different kinds of peach foods, pies cobblers, ice cream and on. The beautiful thing about this festival and its “Food Court” is that all the food vendors are run and manned by local charities, church groups, service clubs and sports associations. This translates into fresh “homemade” food! Now I know that you all know that the “Festival Nomad” is very community oriented and that if I can help out the community we are visiting I will. So, it should come of no surprise when you hear that I decided to support one of the fine community groups! The “homemade” peach pie being sold by the ladies church group got my support! I purchased a big juicy piece of freshly baked peach pie from them! As I ate it, my community spirits rose to a new high!


Now, all I have to do is to find a “BANANA” Festival! 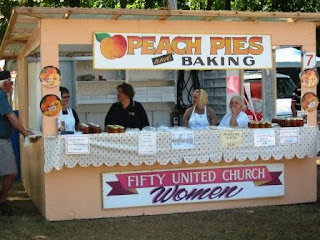 Posted by Gary and Judi McWilliams at 4:54 AM No comments:

One of the perks of visiting festivals is people watching! It is always interesting to see how people react to different situations. In a way it’s like being a “fly on the wall”. Music concerts seem to bring out the best (or worst) in people. The Beaches Jazz Festival is a perfect example of this. There was one lady was really thrilled by the music. She decided that the music would be great to dance to… alone! She went down to the front of the stage and started to dance up a storm. She made moves that I didn’t know the human body could make! She was in a world of her own and it was fascinating to watch!
Then there was the little girl at another music festival. There was a lively band playing on the main band shell stage. In front of the main stage a lower stage had been set up for an earlier Celtic dance demonstration. The lower stage was empty when the band first started to play. Part way through their first song, a little girl ran from the audience and climbed onto the stage and then started to dance to the music. The audience and band loved it! The little girl beamed as the audience showed their appreciation! She was such a hit that other children emerged from the audience and ran to the stage. Each climbed onto it and started to dance. The original little girl was upset that others had joined her that she stopped dancing, stomped off the stage and ran to her parents crying. Apparently she didn’t like to share the spot light. The other children danced on undisturbed!
Animals also create good people watching material. One year when we were at the International Plowing Match, the first attraction we came to was the Canadian Raptor Conservancy Show. There were two handlers who brought out different birds to show the crowd. Some of the birds would fly off one handlers arm, fly over the crowd and then land on the other handlers arm. The sheer delight (terror) on the audience was great to see! Imagine MY surprise when one of the birds swooped down from its flight and landed on MY HEAD!! The tables were turned! I was the one who was being WATCHED! 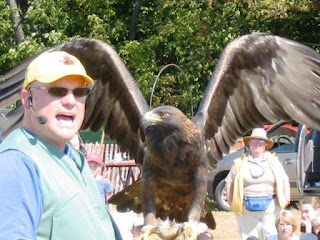 "Fortunately the bird that landed on my head was a Kestrel ~ much smaller then the above bird, but still, a cousin!"
Posted by Gary and Judi McWilliams at 6:00 AM No comments: