On July 1st of this year our 15 year old nephew became a soldier! No, he did not join the Canadian Armed Forces! He did, however, join his fellow students and their history teacher in a re-enactment demonstration at the Cobourg Waterfront Festival. Seeing him and the other young people becoming involved in re-enacting Canada’s past made me think of the thousands of men and women and their families who dawn period costumes each summer and fall weekend to become “living history”! As David Brunelle, one of the organizers of Wasaga under Siege (July 24-26), said to me, “It’s like taking your family on an ‘old fashioned’ camping trip!”, old canvas tents, open fires, boiled coffee, toasted marshmallows and spending quality time with people who have similar interests. Besides, who doesn’t want to play make believe, shoot muskets and wear neat clothing! All that being said, re-enactments and re-enactors play an important part in Canadian society. With the great number of new comers immigrating to our marvelous country, it gives them the opportunity to learn about ’s history and why it is such a great country to live in. Re-enactments also help show how  and the  became separate countries and how we eventually learned to live in peace together. Even if you are not a history buff, re-enactments are exciting and entertaining! The pageantry, colour and action all add up to a wonderful experience! Whether or not our nephew and his friends become further involved in re-enacting, at least they will have had a chance to experience “first-hand” a part of ’s history! My hat is off to his history teacher and all of those other adults who encourage our young people to take an active interest in living ’s past!

Posted by Gary and Judi McWilliams at 5:56 AM No comments:

So here I was, standing on the bare deck of the Peerless II, as Randy described what he had already done, what was left to do and what it was going to be like when he was finished. Back on the Idyllwood, Randy showed me photographs of the restoration so far. As I said before, I couldn’t believe my own eyes! The work that had been done was incredible, and to think Randy was working alone during most of the restoration!
After a number of unforeseen delays, the PEERLESS II was launched and the “new” history of this unique ship began.
Several years have passed since the “restored” Peerless II’s first maiden voyage. Judi and I have been fortunate enough to have enjoyed a few Peerless II cruises on the Muskoka Lakes. As always, Captain Randy regaled passengers with endless tales of “Muskoka Lake facts and legends”.
It will be fun and inspiring to see what’s next for this amazing Muskoka Lakes pioneer! 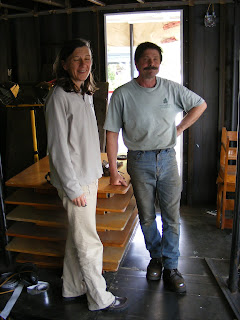 Posted by Gary and Judi McWilliams at 7:20 AM No comments: