Getting There (Part Two)…

Fortunately, this time I followed Judi’s advice and turned right. We followed Hwy. #48, passing the “Sutton this way” sign and headed south towards . A few kilometers south of Sutton we saw a sign saying “this way to Keswick”. We turned right and followed the sign’s directions! We eventually came to and another “Keswick” sign. We turned right again and this time drove straight in to downtown “Keswick”. From there it was easy to find the re-enactment! It was being held at the Georgina Pioneer Village which was part of the Georgina Community Centre complex. The way to this complex is very well marked, we couldn’t go wrong! The sad ending to this story for the “know-it-all Festival Nomad” is that if we had turned left in ’s Point, as Judi had suggested, we would have driven directly to the complex and the re-enactment. We would have arrived a half hour earlier and would have saved a quarter tank of gas! The moral –
“The Nomad isn’t (sigh) always right, but his trusty side kick (Scoop Judi) is!”
UPDATE ~ I wrote this Blog article a number of years ago. Since then GPS devices have taken over the directional thought process. It’s a “sure” way of getting to you final destination… well, MAYBE not so “sure”! One Christmas, my daughter and her husband gave us a GPS device. We were so happy to have it that we named it LUCY, after Schultz’s “know-it-all” cartoon character. All was going well with “LUCY” until I programmed if to find a route to Creemore. LUCY seemed to start off right until we got deep into a forested road. All of a sudden, in the middle of the forest she told us to “turn right” We entered a road that was a “Dead-end”. As we stopped, LUCY announced that we had “Reached Our Destination”! Creemore, my friends, is NOT located in the middle of a “forest” on a “dead-end” road! We started out again, this time with Scoop Judi navigating the route and we successfully found our way to the “real” Creemore. To “punish” LUCY, I put her in the car’s “glove box” while Judi (me navigation hero) and went into the town’s great bakery for a coffee and goodie.


I think that this punishment might have taught LUCY a lesson, because she didn’t “mess up” again! 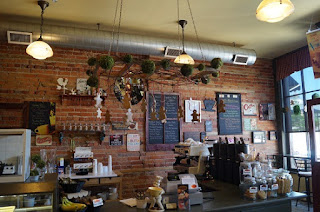 "Coffee & Goodies Galore!"
Posted by Gary and Judi McWilliams at 11:16 AM